The land reclamation for the development of a new port in Gulhifalhu, the Maldives, will result in the permanent loss of natural habitats, which cannot be avoided or mitigated. In order to compensate for this loss, a Biodiversity Offset Management Plan is currently under development with environmental consultants and government authorities. One of the proposed biodiversity offset strategies under this plan is the relocation of coral colonies from Gulhifalhu lagoon. Three coral relocation campaigns have already taken place, as described on this page. The total number of relocated coral colonies at this moment is approximately 34,500.

In order to obtain high success rates (i.e. health and growth of the relocated corals), only experienced coral relocation partners, who have the required knowledge, materials and people, are allowed to undertake coral relocation activities. Activities are permitted and controlled by the Project under the Project EIA. To determine the success of the activity, health and growth of the relocated corals are monitored 6 months after the relocation activity.

Before the Stage I reclamation works at Gulhifalhu commenced, Boskalis had engaged local coral relocation expert Reefscapers to perform relocation of coral from Gulhifalhu to Sheraton Full Moon Resort. The relocation process started with an initial survey of the Gulhifalhu lagoon and reef to determine numbers and types of live coral colonies available for relocation. Based on the survey results, a selection was made of which areas to focus harvesting activities. Coral relocation then took place from 29 May 2020 to 17 June 2020. In total, approximately 7,500 coral colonies were relocated.

The most representative coral species in the Maldives are from the Acropora family. Acroporae can have different shapes including branches, digitates or tables. Those corals are fragile and when relocated, they need to be attached to a hard substrate, such as for example Coral Frames. Other digitate coral colonies include for example species from the Pocillopora family

The ReefScapers team collected the digitate corals in buckets by diving/snorkelling and later placed them into the hold of a dhoani designed for the grouper fishery. The dhoani hold allows for sea water to be constantly flowing to guarantee the best water quality, supply enough oxygen and to maintain a cool water temperature for the corals while they are being transported to the recipient site.

The corals were transplanted onto coral frames. The corals were to some extent fragmented in the process. The number of relocated digitate species is approximately 5,000.

Other reef building coral species are growing into a shape called “massive”. Those massive corals are heavy blocks of mineral reaching about 0,5m³ to 1m³ or more. Smaller colonies were hauled on board the boat and carried in the Dhoani holds with water recirculation.

Reefscapers determined on-site which and how many corals were feasible to be relocated. The number of relocated massive species is approximately 2,500. 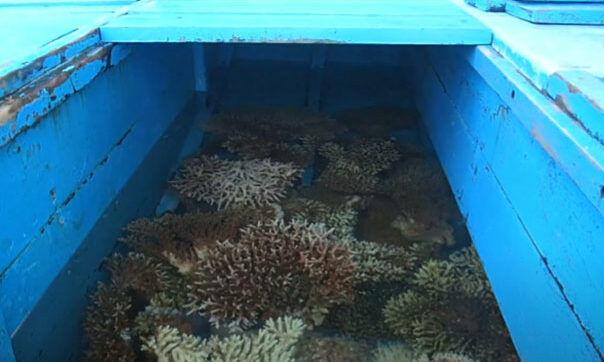 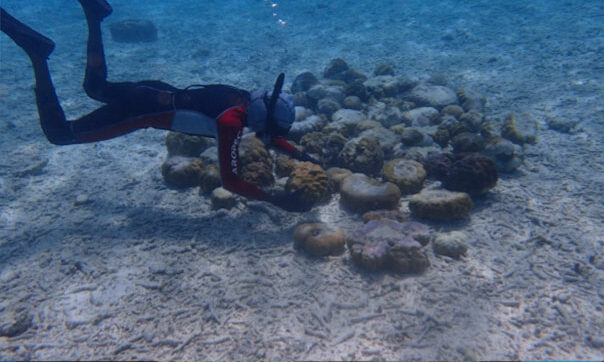 Survival and Growth After Half a Year

Monitoring of the translocated corals was carried out from November 2020 to January 2021 by ReefScapers to determine survival and growth of the colonies. The digitate corals’ survival rate is approximately 93% and growth is satisfactory. The development of the massive corals could not be assessed numerically, however they also appeared to be faring well.

During the period when preparations for Stage II of the project are ongoing, there is

a window for further coral relocation opportunities. One of Boskalis’ partners in the Artificial Reefs Program, Coralive.org, reached out to explore the possibility of relocating coral colonies from Gulhifalhu lagoon to the newly established coral nursery at Sonevafushi. Once the coral relocation campaign was approved by the relevant governmental authorities, Coralive.org and ReefScapers joined forces to relocate a total of approximately 15,000 coral colonies. This campaign took place between 21 February and 22 March 2022. The target species group for the Soneva nursery was also Acroporae. In total, approximately 13,500 Acropora, 1,000 Pocillopora and 500 massives, mostly Porites, were sent to Sonevafushi.

The Acroporae and Pocilloporae were placed on metal table structures, which had been pre-treated using Mineral Accretion Technology, or ‘MAT’. ‘MAT’ is a restoration technique that utilises low voltage electricity to speed up the growth rates of corals by actively depositing Calcium Carbonate layers on the steel rebar and mesh of the coral nursery tables.

Survival and growth will be monitored 6 months after the relocation activity as per Project EIA. This monitoring scope is planned for Q3 2022.

After the relocation of corals to Soneva was completed, ReefScapers continued to relocate coral colonies. From 23 to 31 March 2022, approximately 12,000 colonies have been relocated to Kuda Huraa, among which 8,000 Acroporae, 1,500 colonies of Pocillopora and 2,500 colonies of massive corals. 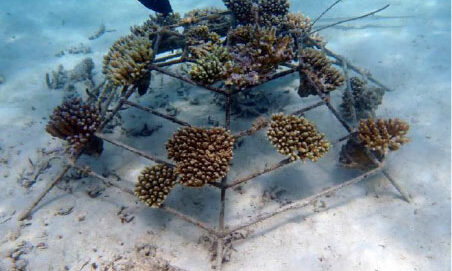 There were various potential issues forecast for the translocation process. Coral translocation took place before the high sea surface temperatures occurring in the Maldives after the start of the southwest monsoon, leading to a higher risk of bleaching. Furthermore, As the relocation of the corals took place around the spawning period, gravid colonies were also relocated. Lastly, there were Drupella, corallivorous snails, present at the Gulhifalhu reef.

Despite these identified risks, the survival rate of most trips was 100% with healthy colonies. Towards the end, there were a number of bleached colonies, possibly due to the rising temperature at Gulhifalhu lagoon. The relocated coral colonies will be monitored during the coming months for their health and growth and special attention will be given to remove any Drupella snails that may have accidentally been relocated among the corals.

Survival and growth will be monitored 6 months after the relocation activity as per the Project EIA. This monitoring scope is planned for Q3 2022.

Currently, there is a fourth campaign underway, aiming to relocate another 2,500 coral colonies to the coral nursery at Soneva Resort. Relocation activities commenced on 9 August 2022. Upon completion, this page will be updated with further details.